I’m just about ready for the show next weekend. I’m leaving Monday though to drive up to NC to meet up with my mom who is coming to help me! We’re going a few days early to go to the Smithsonian in DC – I haven’t been since high school and have always wanted to go back! I’m also looking forward to having time to visit a couple of shops up there – last year was a quick trip as I still had the shop and couldn’t be gone so long.

It has been a hectic week with the storm and finishing preparations for market. We were fortunate to have Isaac not hit us directly but we did have some tropical storm force winds and squalls of rain on Tuesday and Wednesday. I wore sunglasses for the first time in a week yesterday – it was so nice to see the sun and blue skies again!

I went to the framer today and picked up the frames and mats for the pieces I’m releasing next weekend. I still have to stretch them and put the needlework into the frames but that’s a chore for tomorrow! I’m releasing Carnival (the third in the Rio Trio), Summer Logs (the one I’ve teased you with!), and Pandora’s Boxes. Here’s Carnival – stay tuned this week for previews of the rest. 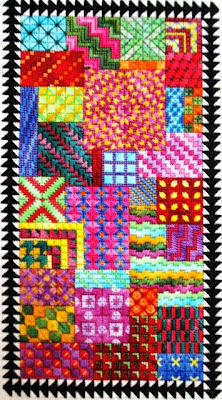 Here is the Double Delights for September – it’s Plinkime (Pink & Lime!). I’m also releasing it next weekend at market.﻿ 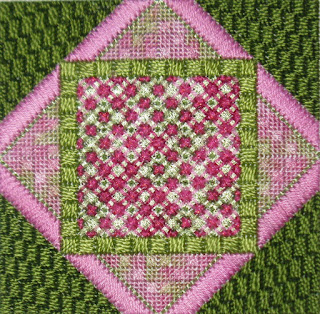 I’ll have October’s Double Delights there too – shops attending market will be able to purchase it early. It’s called Charbleu (Chartreuse & Blue). This may be my favorite color combo! 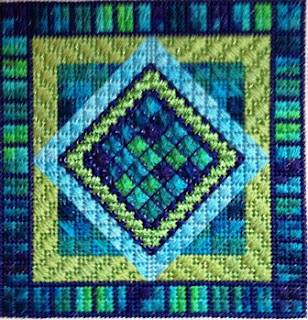 Here’s a study of Sammi, my cat who loves to have a “pillow” to rest her head on – she’s not too choosy as you can see from these photos but she does have excellent taste! She likes to lay on the table next to the couch where I sit to stitch. I tried for a long time to not let her lay there but finally gave up – she likes the heat from the lamp and isn’t bothered by anything that might be on the table!
Here she is with her head on a stapler – she’ll use anything for a pillow! 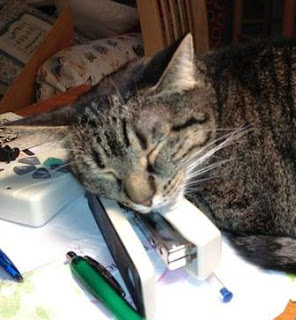 this time, she’s loving on the pearl cottons﻿ 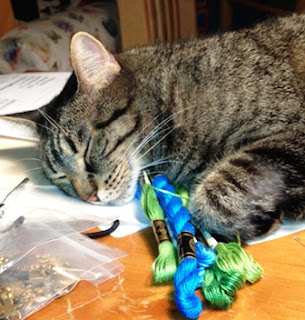 now, she’s leaning against my stitched Carnival – she’s not actually touching the stitching and I have to say I did pick up the canvas after I took the photo – this is not allowed!

And last but not least, here she is using my Twirlament ornaments to rest on – doesn’t look too comfortable and these were also moved quickly after the photo! 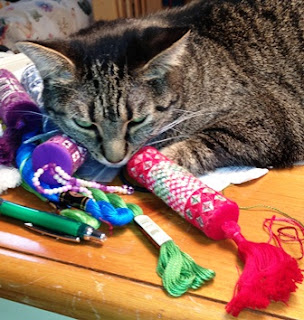