Happy New Year! I always select a “Word for the Year” and this year I decided on CREATE. I considered Creative & Creativity but finally decided on create because so many words can come after. For example, Create a design, Create a new life, workspace, garage, Create a healthier lifestyle, etc, etc.


Along these lines, I started a new design and took some photos to show you the beginning…this will be somewhat of a “tutorial” on how I begin to stitch a project on canvas. Once I’ve decided on the “bones” of the design, I draw the outline on the canvas.


You may wonder why I always draw the outlines on my canvas and strongly recommend in most of my patterns that the lines be drawn on the canvas before stitching. After all, isn’t it “counted” canvas?! Well…if you take the few extra minutes to draw the outline on the canvas before you begin stitching, it will save you hours of time (which you can use to stitch!) because you won’t have to count as much and you will have lots of places where you are double-checking to be sure you’re stitching the right thing in the right place. I often have students tell me that having the lines makes it a lot easier and much more fun to stitch. I recently had a friend visit who told me that she’d gotten very frustrated with one of my pieces. I asked why and she said it was because she’d gotten off somewhere and couldn’t figure it out. I was quite dismayed until she sheepishly admitted she didn’t draw the lines and that contributed greatly to her trouble. She said she wasn’t going to ever tell me but decided it would be okay. We had a little lesson on drawing outlines on canvas and she’ll probably never not draw the lines again, especially when I write “I Strongly Encourage Drawing the Lines” at the beginning of the pattern! 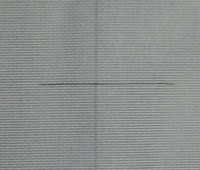 Here’s a close up of a line being drawn. I place the pencil in the “groove” between two threads so the line is actually drawn on the holes and not on a long thread. I place the pencil and then drag it along the canvas (very lightly). Ideally, I’d use a hard #3 pencil but in reality I am very careful and use a mechanical pencil. There needs to be 36 threads between the drawn lines so you need to be able to see a thread directly on each side of the line. 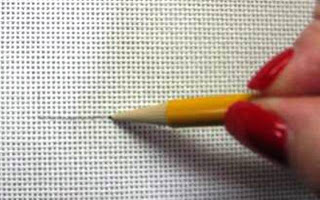 I then count 36 threads and draw a short line and continue across until I have three blocks. I then turn the canvas upside down and mark the other side the same way. I do it like this because I find working in one direction is more comfortable than the other.

At this point I extend the vertical center line closer to the top and bottom of the design. I then turn the canvas and mark the canvas just as I did from side to side. Before drawing the lines all the way across, I recount to make 100% sure I counted correctly the first time – this is the “Measure twice, cut once” theory! (I didn’t take a photo at this point – sorry).
Next up is a photo of a closeup of one 36×36 thread square – note how the lines are “on the holes”. 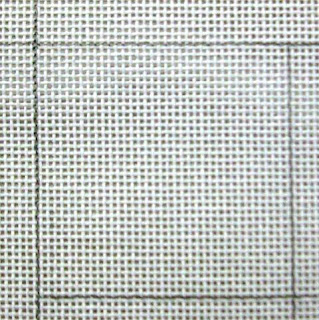 Here’s the canvas, completely drawn. After I took the photo, I realized there was a red Sharpie and a yellow highlighter on the counter next to the canvas – they were there because I’d been using them earlier for something else. DO NOT ever use either of these to mark your canvas! 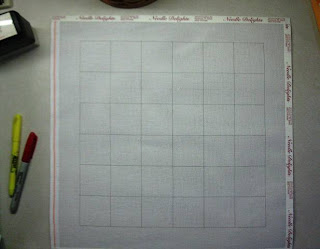 I love a new canvas! The last step before stitching is to attach the canvas to wood stretcher bars with rust-proof tacks. Now I’m ready to stitch – yeah! The picture is crooked, not the canvas! 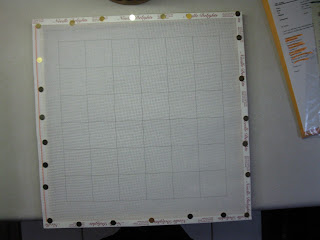 And…here’s the first square…I’ll post my progress as I continue…I’m using Vineyard silks and Threadworx overdyed silks again – I just love them! 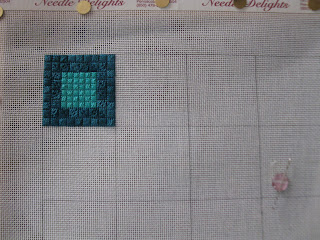 And…what post would be complete without a photo of the animals…my faithful stitching companions. They don’t usually lie on this table together but this day they were so I grabbed the camera. Sammi is in the front and Boots in the back – they like to “sun” themselves under the lamp! 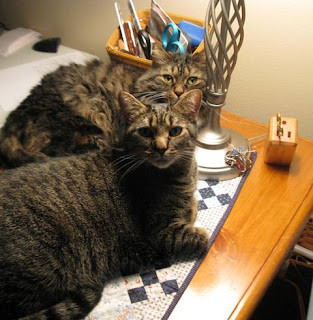 ﻿Happy New Year to all! May you have many happy hours of stitching in 2012!
Kathy
Posted in Uncategorized