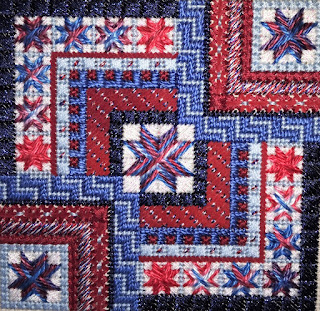 You may be asking yourself when “Americana” became a COLOR?! I say now! I like to throw some different “colors” into my series of Color Delights to make you go hmmmm…. Occasionally somebody will tell me (or ask nicely!) what they’d like me to design for them. Americana came from one such “brainstorming session” (AKA lunch with friends!) when I laughingly said I could do something small with red white and blue stars and thought out loud, “I know, I’ll throw it in the Color Delights series and call it “Americana”. The joke was on me as I pondered it briefly and then said, “that’s actually a great idea”! So here it is…just a few weeks later! I love it when something just flows so easily!
I’m almost done writing instructions and ordering threads and have just posted the pattern and kits on the website. Shops and customers may pre-order now.
I’ve started a new series and finished the first of four designs yesterday. That’s all I can share at this point – stay tuned for more details…
Until next time, keep the needles flying!
Kathy
Posted in Uncategorized